What is Friction Drag?

Friction is the resistance that happens when two things rub together—like air against an airplane. Friction is partly what causes drag.

How Does Friction Work?

When an object moves through air, the air closest to the object’s surface is dragged along with it, pulling or rubbing at the air that it passes. This rubbing exerts a force on the object opposite to the direction of motion—friction drag.

The thin layer of air closest to the surface of a moving object is called the boundary layer. This is where friction drag occurs. 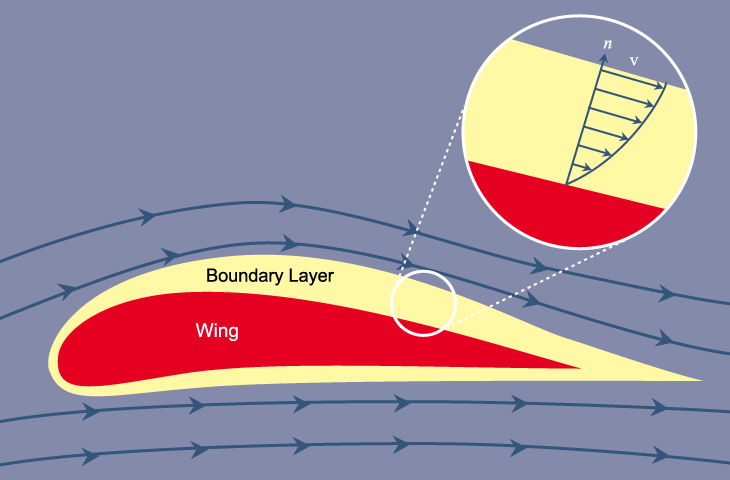 Air "Sticks" to a Wing

Though air is much less "thick" than, say, honey, like all fluids it has viscosity—internal friction. The air directly touching the wing does not slip past it but stays "attached" to it. The air "stuck" to the wing rubs against the air just above it, which in turn rubs against the air just above it, and so on, up to the outer edge of the boundary layer.

No, fluids move in either a laminar (smooth) flow or a turbulant flow. In laminar flow the motion of all the fluid particles is very orderly, with all particles moving in straight lines parallel to the flow. At low velocities the fluid tends to flow without mixing. In turbulent flow the fluid moves in an unpredictable manner controlled by pressure and temperature differences. ... more

Explore the relationship between drag and weight by experimenting with air resistance and vacuums.

Friction is what keeps dust on fan blades. Many dust particles are small enough to lie within the thin boundary layer near the surface. No matter how fast the blades spin, the boundary layer provides a zone where the wind speed decreases to zero. The only way to remove all the dust is to wipe it away.

Which fluid has the lowest viscosity?

Matter is found in four states: solids, liquids, gases and plasmas. Compared to the other states of matter, gases (like air) have an incredibly low viscosity. Gases have very low viscosity because their molecules are spread out, creating more space between each molecule and allowing the molecules to compress more.  Also, the inter-molecular forces of attraction between gas molecules is weaker compared to liquids.