Why is Pressure Such a Drag?

Air flowing past an object pushes harder against the front than the back. This difference creates a backward force called pressure drag.

Does Drag Increase with Speed?

As an aircraft's speed increases, drag on the aircraft generally increases much faster. Doubling the speed makes the airplane encounter twice as much air moving twice as fast, causing drag to quadruple. Drag, therefore, sets practical limits on the speed of an aircraft.

How do you Reduce Pressure Drag?

The air pressure against the leading side of an object is higher than the pressure in the randomly churning eddies of the wake on the other side of it. Streamlining reduces this pressure difference. 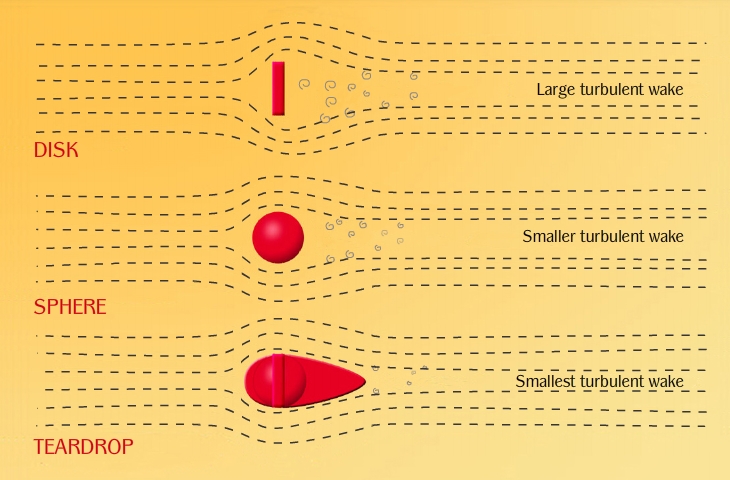 The more streamlined an object is, the smaller the wake it creates. The area of turbulent wake behind an object has less pressure than the area in front of the object, thus a backward force is generated. Although the three shapes above have the same diameter, the teardrop is more streamlined—it has a rounded front and tapered tail, a shape that slips through the air more smoothly and helps reduce pressure drag.

Even the wires strung between the upper and lower wings of older biplanes produced considerable pressure drag. Today aircraft are shaped to minimize drag. The fuselages of airliners, the supporting struts on aerobatic biplanes, the enclosures surrounding fixed landing gear, and other exposed surfaces are all streamlined.

The more you streamline an object by elongating its rear surface, the more you reduce the size of its wake and the resulting pressure drag. But elongating an object increases its surface area, and that increases the effects of friction—another form of drag!

Making the most of streamlining requires a trade-off. An object must be tapered enough to reduce the size of its wake. But it must also be short enough so the accompanying increase in friction drag doesn’t offset the lower pressure drag.

What causes a fluid to seperate from the body it is flowing over?

Friction slows down the thin layer of air moving closest to the surface. When the air slows enough, it separates from the surface, creating a wake (pressure drag). Surface roughness mixes up this layer of slow moving air with the faster moving air just above the surface. This "energizes" the air, causing it to speed up and to remain close to the surface. ... more

Find out about two different types of drag: pressure and friction.

A ski jumper leans into the wind to form a streamlined shape to reduce pressure drag.

Which ball generates the least amount of pressure drag?