Rockets use thrust to reach orbit, but they aren’t the only type of vehicles that direct thrust down to create vertical flight. However, relying on the brute force of thrust to counteract weight requires far more fuel and energy than using the force of lift. Even so, an aircraft that can take off and land vertically can hover, fly slowly, and land in tight spaces—things conventional aircraft cannot do. 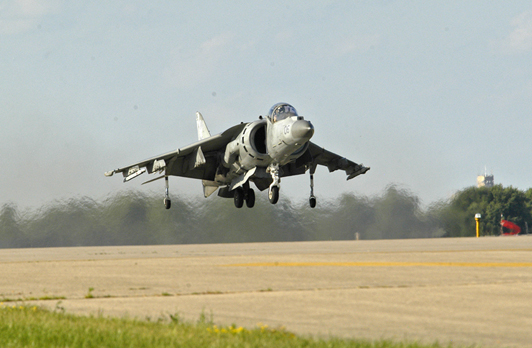 The powerful exhaust streams from the jet engine of the Harrier fighter can be directed downward as well as backward, and their direction can be changed in mid-flight. This allows the Harrier to take off vertically, fly forward, stop in mid-air, back up, and land vertically. It can also take off and land like a normal airplane.
Credit: McDonnell Douglas Corporation

A tiltrotor is an aircraft that uses a pair tiltrotors mounted on rotating engines at the end of a fixed wing to generate vertical and horizontal thrust. It combines the vertical capability of a helicopter with the speed and range of a fixed-wing aircraft. For vertical flight, the rotors are angled so the plane of rotation is horizontal, like a helicopter. As the aircraft gains speed, the rotors are tilted forward, with the plane of rotation eventually becoming vertical. The wing then provides lift, and the rotor provides thrust like a propeller.

Why do some helicopters have tail rotors?

A helicopter’s spinning blades create thrust like a large propeller, but the thrust is directed vertically. As the rotor spins the pressure on top of the rotor is reduced, and the pressure underneath increases, generating thrust. This allows the vehicle to take off and land vertically and to hover. To move forward, the helicopter tilts slightly to direct some of its thrust forward.

If a helicopter’s engine stops, the main rotor will continue to spin, allowing the helicopter to slowly land.

True: In normal, powered flight, air is drawn into the main rotor system from above and downward.  However, if a helicopter’s engine stops, air rushing up through the main rotor will make the blades spin.  This is known as autorotation. Autorotation is permitted mechanically because of a special clutch that disengages the engine from the main rotor, allowing the main rotor to rotate freely.